A Diplomate shows dentists the ins and outs of accurate digital impressions for sleep appliances.

Intraoral dental scanners provide dentists with a tool that can digitally capture the images of teeth and surrounding soft tissue with astonishing accuracy. The clinician simply waves a rather expensive wand over the teeth and a rotatable image instantly appears on the screen. This new technology can represent an opportunity to replace old methods with one that is faster and more comfortable for the patient. But the unknowns of scanning can be intimidating, as is the case for many dentists whose training and experience have always focused on physical impressions and plaster models. Although the presence of scanners in dentistry is becoming increasingly more common, it is estimated that less than 25% of dental offices own a scanner, and those that do tend to be larger multi-dentist practices.1

How do a scanner handpiece and a computer produce a printable 3D image? As Yale University professor of biomedical engineering James Duncan, PhD, a pioneer in 3D image technology, explains, scanners “gather information about the shape and size of dental structure or arches as well as the position of implants by first projecting structured light (basically a light grid pattern) or a laser beam onto a tooth’s surface and then recording how the pattern or the beam is changed or distorted when it hits the surface using very high resolution cameras. Then software is used to reconstruct or form a full 3D model of the structure by fitting a polygonal mesh to a large set of points that cover the tooth or teeth being studied.”

In dentistry, increased accuracy means fewer remakes and reduced chair time for insertion adjustments. Recent tests on in-vitro models have shown scanners to have accuracies (trueness) in the range of 50 micrometers (ranging from 20 to about 100 micrometers).2,3 David Walton, CEO and founder of sleep apnea therapy company Respire Medical (acquired by Whole You), welcomes scans for oral appliances. “Due to the accuracy of digital scans, not only have we been able to reduce the turnaround time, but we’ve seen a dramatic reduction in chairside adjustments and remakes,” he says.

Sleep apnea therapy company ProSomnus Sleep Technologies accepts both digital and traditional impressions, depending on the dentist’s capabilities and comfort level. For dentists who opt for a digital workflow, “ProSomnus features a complete digital manufacturing capability, utilizing digital technologies for order intake, technical communication, design, quality control, and output,” says Len Liptak, CEO, adding that “digital images, when taken correctly, have the potential to create many benefits for the practice, the patient, and the device manufacturer. With a digital manufacturing platform, for example, digital images may reduce process steps, which can improve turnaround times and quality.”

In the United States, a majority of intraoral scans are used for restorations and orthodontics, with only a small percentage being used for the fabrication of sleep appliances. However, recently some scanner and software manufacturers have begun to address the unique needs of the dental sleep medicine practitioners into their systems.

For example, though orienting the arches as a closed bite is similar for all types of appliances, sleep apnea appliance impressions require that, after each arch is scanned and 3D images acquired, the scanner to record the position that the upper and lower teeth will occupy within the appliance. Some scanner and software options have incorporated the capability of recording multiple bite registrations and the capability capturing both closed and open protruded bites to better facilitate the creation of sleep appliances.

Centers for Disease Control and Prevention guidelines state that handpieces and other intraoral devices should be cleaned and heat-sterilized between patients.4 Many scanners have removable heads that can be safely autoclaved. Specialized handpiece sterilization units, such as the Scican Statim that features increased temperature consistency along with relatively short cycles, can help maximize the useful lifespan of the scanner heads. 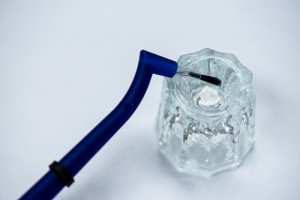 A small brush application of titanium dioxide powder may be helpful when applied to reflective surfaces prior to scanning. 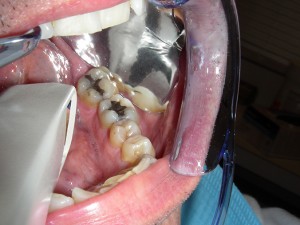 Scanners are designed to record the dimensions of objects that deflect light. However, shiny surfaces—for example, amalgam restorations and gold crowns—can present a unique challenge. Although most current scanners no longer require the use of reflective powder, this author has found that a small brush application of specially formulated titanium dioxide powder, such as 3M High-Resolution Scanning Spray, applied to reflective surfaces can be of great benefit. In turn, the use of reflective absorbent pads, such as the Microcopy NeoDrys, which are relatively invisible to the scanner, can help mask unwanted buccal soft tissue from being incorporated into the scanned image. 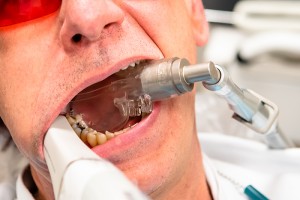 Effective scanning requires the objects being recorded be both dry and isolated from the cheeks and tongue. Patients with obstructive sleep apnea present a unique anatomical challenge, as large tongues that rest over the lower teeth are often the rule rather than the exception. External lip and cheek retractors are commonly recommended by manufacturers to facilitate access. Intraoral retractors that incorporate suction, such as the Zyris Isolite, can often prove useful in maintaining dry and unobstructed posterior fields. 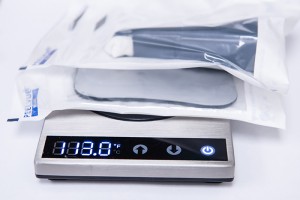 As all dentists know, a cold mirror in a warm mouth will fog. This is also true for the scanner’s internal mirrors, which address this problem by including heating elements within the scanning head. However, a cold scanner head needs to be connected to the handpiece for several minutes before it is warm enough to be ready for use. This downtime can be frustrating, especially in situations where different sized scanning heads are used for the same patient (in various areas of the mouth). A small tabletop heater can provide a simple way to warm the scanner heads and facilitate quicker changes.

Health Insurance Portability and Accountability Act (HIPAA) regulations mandate that transmission of patient records, which includes scanned images, be done in a way that safeguards patient privacy. Although the scans can be emailed directly to the lab as raw data, such as .STL files, large file size and maintaining HIPAA compliance can make this cumbersome. To facilitate a streamlined workflow, manufacturers commonly host an online platform that provides a convenient interface between doctors and labs. Ed Shellard, DMD, chief dental officer of Carestream Dental, describes its portal: “Data is automatically protected against unauthorized access during file transfer and while temporarily stored in the cloud. Additionally, the data is encrypted by the practice’s PC prior to transfer and remains encrypted while residing in the cloud. Should the cloud server be stolen or security breached, the data will not be readable. “

Once a lab has been registered with the company’s portal, transmitting a scan and prescription is as simple as choosing the lab from a drop-down menu and typing (or pasting from prewritten text ) lab instructions, or if necessary, attaching additional files such as photos or a scan of the lab’s Rx form. 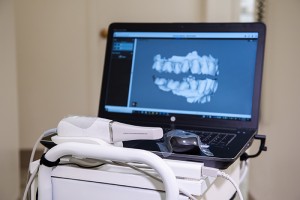 Intraoral scanners, once the size of Star Wars robots, have become increasingly portable, with small handheld imaging devices communicating with laptop computers. Although most currently available systems have a wired connection between scanner and computer, some manufacturers have introduced wireless scanners, eliminating the need for a connecting cable.

As digital technologies progress at lightning speed, dentists are faced with the big question: Risk spending tens of thousands of dollars on a scanner system that might be obsolete in a couple of years, or wait? Carestream Dental’s Shellard believes future advances will be primarily in easily upgradable software rather than associated physical hardware. “Speed, accuracy, ease-of-use …it’s all powered by advanced acquisition software,” he says. “Doctors will be more willing to adopt the technology if they know they won’t have to make a major investment every couple of years to ensure they’re practicing with the latest technology. Instead, after the initial purchase of a scanner, they need only maintain a software support plan to make sure all the latest advancements are being pushed to their scanner.” 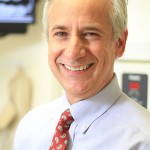